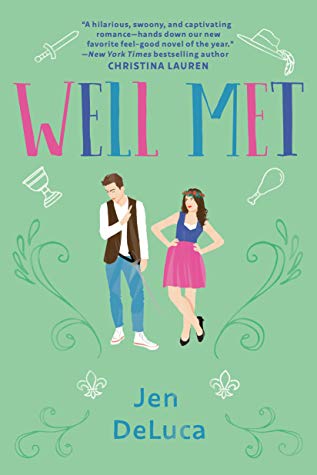 Yes, the faire is the catalyst for the romance. Yes, if you’re unfamiliar with renaissance faires, learning about them through newcomer Emily’s eyes could prove to be an exhilarating read. But for me, the pacing, the stakes, the worldbuilding, the build-up up to the romance… it all fell flat.

When Simon and Emily were in-character at the faire, the chemistry between them was electric. Their witty repartee and shameless flirting burst from the page, and I could’ve easily devoured an entire book about Blackthorne and Emma. Emily and Simon? Not so much.

I did enjoy Emily and Simon’s sweet and steamy love scenes, and once they were officially a couple their relationship became more fun (and believable) to read. Sadly, though, not fun enough for me to want to finish the book.

Again, pretty disappointed with this one. I’m ready to move on, so if you’d like to know more about my thoughts I’d be happy to discuss further. Overall, perhaps my expectations were too high, but given the premise of this story I think my hopes were more than faire.